Conductor and guitarist Brian Edward Dowdy is Artistic Director of the Minnesota Philharmonic Orchestra, a LGBTQIA+ ensemble committed to performing works by composers from underrepresented populations. He is also Music Director of Journey North Opera Company and a lecturer at the University of Minnesota, where he leads the Maroon Campus Orchestra. His prior conducting positions include the St. Cloud Symphony Orchestra and Mississippi Valley Orchestra. In his current and recent directorships, he has increasingly focused on works by living composers and composers from underrepresented and marginalized populations, bringing new and rarely performed works by Florence Price, Samuel Coleridge-Taylor, Sahba Aminikia, Mary Kouyoumdjian and many others to the concert stage.

In 2013, Dowdy conducted the Atlantic Chamber Ensemble in a night of 20 premiers inspired by Beck Hansen’s Song Reader. His performance of Benjamin Britten’s The Rape of Lucretia with Journey North Opera Company was named one of “The 10 concerts that shone brightest in 2019” by the Twin Cities’ Star Tribune. With the Minnesota Philharmonic Orchestra, Dowdy conducted the 2021 world premier of Sahba Aminikia’s House of Circus, performed in collaboration with Sirkhane, a social circus school on the Turkish/Syrian border. In June 2022 he will lead the premier of Walking with Ghosts, a bass clarinet concerto by Mary Kouyoumdjian, featuring soloist Jeffrey Anderle.

In addition to symphonic works, Dowdy has recently conducted performances of Don Giovanni, Hänsel und Gretel, Susannah, Le tragédie de Carmen and The Rape of Lucretia, and he has served as assistant conductor for several other productions. He has led choral and choral-orchestral performances with the University of Minnesota Campus Singers, Chorus Polaris, the Great River Chorale and the Sanctuary choir of St. Stephen’s Richmond, with whom he recorded Music for Compline, an album of plainchant and renaissance motets. He also produced and sang in Pesher Compline, performed inside James Turrell’s Sky Pesher, as part of the Walker Art Center’s 2014 Open Field.

Dowdy studied at Oberlin College, the San Francisco Conservatory of Music and the University of Minnesota. He holds degrees in conducting, classical guitar performance, English literature and East Asian Studies. His principal mentors have included Mark Russell Smith, Erin Freeman, Kathy Saltzman Romey, Daniel Myssyk, David Tanenbaum and Stephen Aron. Dowdy currently resides with his wife and son in Minneapolis, which is the occupied land of the Dakota and Ojibwe peoples. When not making music, he can usually be found at the dojo practicing Aikido, the Japanese martial “art of peace,” or building, repairing and riding all manner of bicycles.

Thrilling ensemble...in a class with the top young string quartets

The thirteen-piece chamber orchestra, led by Brian Dowdy, had palpable ensemble energy on opening night. Dowdy creates a sensitive environment for the singers to shine 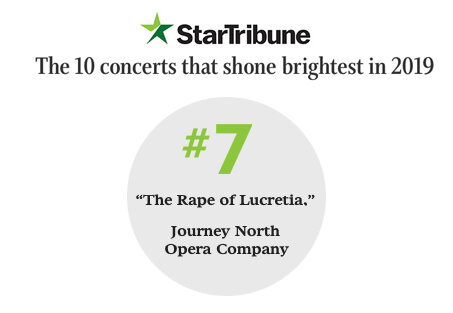